An email to our home exchangers: "Our first day here we just sat like lumps and enjoyed not having to be in a car." In Fairbanks our home was in a birch forest, which made for beautiful evening light through the trees. As it was almost Summer Solstice, darkness was virtually non-existent. That takes some getting used to. Even after the sun set, the light glowed through the trees. Wild roses that we had noticed along the Alaska Highway and in British Columbia were also blooming on the forest floor here. Overall, a beautiful, quiet and relaxing setting for us to recoup after so many days on the road.

Detailed notes about the house and locality from our exchangers were greatly appreciated. A couple things were different living in Fairbanks. Drinking water in the area was ever so slightly tainted with arsenic, so although some people chose to consume it, we opted to drink water treated with a reverse osmosis filter. Also popular with locals was Fox Spring water, but apparently that also contains arsenic. Another difference was no trash collection, and we had to drop it off at a transfer station a mile or so south of the house.


Our second day in Fairbanks, curiosity about Denali drove us to make a scouting trip, since it was only a couple hours away.  Now in retrospect, it seems a little crazy that we got back on the road after just one day's rest!  But we were glad we did because it gave us a chance to better understand how we wanted to see the National Park. We drove down the first 12 miles of the road into the park, which is the only part section which allows private vehicles, and made plans to take the bus all the way in when we returned later in the month. A Northern Goshawk perched high in a treetop along the road had attracted a crowd, so we stopped to take a look as well. We noticed the train running past Denali to Fairbanks, a trip we hope to make someday. Finally we drove past a B&B near Healy, recommended by our home exchangers, and decided it would be a nice area to stay when we returned.


Sunday afternoon we were ready to start seeing what Fairbanks was all about. We spent a lot of our time at the University of Alaska - Fairbanks, which was very close to our home. The first stop was the U of A Large Animal Research Station (LARS). Student guides gave interesting presentations at the large enclosures for Muskoxen and Caribou, but our viewing time was limited in order to minimize the impact on the wild animals and their adorable young.

Next we made a visit to Creamers Field Migratory Wildlife Refuge, and saw our first Sandhill Cranes. We came back another time or two before leaving Fairbanks to enjoy the birds and wild iris, and also entered their quilt raffle.


Our last stop of the day was the  U of A's Museum of the North. The ultra-contemporary museum was a great introduction to Alaska. We highly recommend both auditorium shows, Dynamic Aurora and Winter. The Place Where You Go to Listen was also interesting, but was out of order on our first visit.

Monday we headed to Chena Hot Springs for the spa as well as in hopes of seeing moose, said to be common in that area. And moose we did see on the way, but when we got out to take a picture, mosquitoes absolutely swarmed us.


Fortunately we saw more moose at the hot springs, and there was even a mama with her calf trotting through the grounds. We started off with a tasty lunch at the resort restaurant, which served fresh produce from their organic gardens. On the tour of the geothermal facility, we learned that the Chena Hot Springs Resort is powered exclusively by geothermal heat. Chena is also a great spot for viewing the Northern Lights, another item on our "next time" list. After a dip in the Rock Pool, and a few more photographs of the grounds we headed back towards Fairbanks.


When we reached State Hwy 2, we got curious about the little town of Fox so headed north. I don't remember if we had the Silver Gulch Brewery in mind, but we ended up there for dinner. The most northerly brewery in America served delicious meals in a modern atmosphere and offered tasty brews with fun names like Epicenter Ale.

On the way home we stopped at the Alyeska Pipeline Visitor Center, an interesting pipeline viewpoint, then popped our father's day cards in the mail.


Early Tuesday afternoon we spent about an hour strolling through the U of A's Georgeson Botanical Gardens where we learned about arctic gardening techniques while enjoying the plants & flowers. With 24 hours of daylight, plants grow like mad in Alaska summers, producing famous giant cabbages. We were too early in the season to see them at their peak.

We took a short drive to the nearby berg of Ester but it didn't take long to see the former gold mining camp. We got bad tar on our car from chip seal repairs after the recent earthquake.

Still in exploring mode, we went a little further south to the town of Nenana.  Located the confluence of the Tanana and Nenana Rivers, the little town has hosted The Nenana Ice Classic, a lottery to predict the  date of the river's spring breakup, for almost 100 years. We bought two tickets at the visitor center, choosing our respective moms' May birthdates. We didn't win, but there is always next year...


Wikipedia reports that "This lottery began in 1917 when a group of surveyors working for the Alaska Railroad whiled the time they spent waiting for the river to open and boats with supplies to reach them by forming a betting pool. Interest in the pool continued and spread through Alaska. This lottery has paid out nearly $10 million in prize money with the winning pool in recent years being near $300,000."


From the visitor center we went out to find the tripod that we hoped would move either May 2 or 9th. A local museum contained a lot of Ice Classic memorabilia as well as Athabascan cultural information, and we also stopped in a little railroad musem.  An hour and a half later we were on our way back to Fairbanks, with Mike once again amused by the signage for a local pub called Skinny Dick's Halfway Inn. 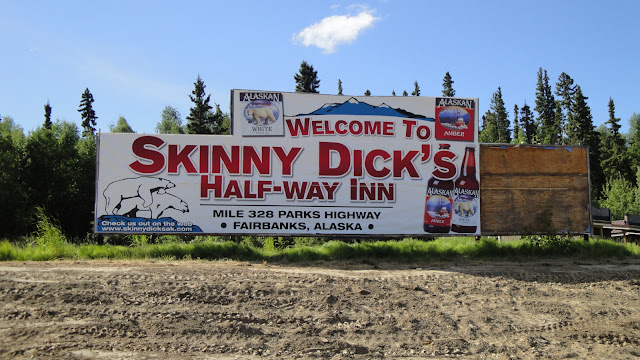 The last stop of the day was an overdue car wash. We found a place which guaranteed to get your vehicle clean. We went through twice and the car was still filthy, but at least we could better see the nasty spots of tar Mike had to scrub off!

Wednesday we scheduled tours of the Geophysical Institute and the Arctic Region Supercomputing Center (ARSC), both located on campus. At the ARSC Discovery Labs we participated in a 3-D virtual reality demonstration. While we had a chuckle over the, hopefully tongue in cheek, Redoubt Volcano Level of Concern Color Code chart (made of colored construction paper with a brad holding the arrow pointing to orange), the Geophysical Institute was quite impressive. We had the opportunity to visit with an Alaska Volcano Observatory (AVO) scientist who monitors volcanic activity. He played the audio from the 1989 near plane crash of KLM Flight 867 due to volcanic ash from Mt Redoubt (simulation), a convincing example of the importance of the AVO. The scientist's attitude was "take that, Bobby Jindal." He also compared human efforts to try to control global warming to fleas trying to control the direction of a dog.

Thursday we went to Eileson Air Force Base to do some shopping, and got a kick of getting a windshield sticker from the most northerly USAF base. A stop at the Santa Claus House in North Pole, Alaska was fun in spite of being touristy. The tradition started over 60 years ago when a local man put on a Santa suit for kids in the small community.

Back in Fairbanks, we strolled around the town center and checked out the Unknown First Family sculpture by the Chena River. Later that afternoon, with only 4 days away from the Summer Solstice, we headed out the Steese Highway towards Circle to the most northern point we would experience. Surprisingly, you can see the road in street view Google Maps! We headed back to Fox for another tasty dinner at Silver Gulch.

On and off we had discussed the possibility of going up to Prudhoe Bay. The Dalton Highway, or Haul Road, is a 360 mile service road for oil operations. It is very rough and the risk of vehicle damage is high, particularly when passing big trucks, so we didn't want to take our car. The option that appealed to us the most was taking a bus up and flying back, but the weather for flying was iffy and ultimately we didn't make the trip. Prudhoe Bay has been added to our "next time" list.

Our last few days in Fairbanks were spent restfully revisiting spots we had enjoyed previously, taking walks, and generally looking around appreciating this place we had called home for 11 days. Without darkness to signal the days' end, we often found ourselves up quite late. Our sleep schedule was often unusual, but Kirt Glassman, an Estes Park friend who'd lived many years in Alaska said,


"Try to forget about time, you're in a place in this world where it doesn't matter. Sleep when you're tired, eat when you're hungry, just enjoy the experience. Do your best to do away with time schedule and personal habits. Dusk from 1am should be experienced."


We also started thinking about where to head next. On the drive up it had worked well to stop when we felt tired. But now we would heading into the more populated areas around Anchorage and the southeast, and with the July 4th weekend approaching, we (especially me) worried about availability, and so we decided to make some plans. From the downstairs office/library where we also enjoyed our home exchangers' extensive classical music collection, we spent a fair amount of time planning our itinerary and making reservations for accommodations through July 9th.

The day before we left we opted out of the Summer Solstice festivities and instead cleaned, did laundry and packed up. Anchorage, Seward, Homer, Kenai, Valdez, Palmer and Chitina would soon be more than dots on a map.
at Monday, June 22, 2009