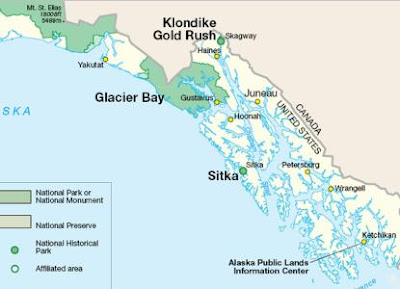 The 13th might be unlucky for some, but this day in July was one of the highlights of our entire Alaska trip -- or maybe any trip!

The marine wilderness of Glacier Bay National Park and Preserve includes tidewater glaciers, snow-capped mountain ranges, ocean coastlines, deep fjords, and freshwater rivers and lakes. The park lies west of Juneau, AK and can only be reached by plane or boat. The only road connects the small town of Gustavus and its airfield to park headquarters at Bartlett Cove (a mere 10 miles).

This lack of roads is almost completely alien to our experiences as National Park enthusiasts and presented a unique challenge to even scratching the surface of appreciating this park.


So, we decided the best way to see it was to book a flight-seeing tour -- the three hour Pilot's Choice flight with Mountain Flying Service out of Haines. This flight included, at the pilot's discretion, a landing on a remote Gulf of Alaska beach on the Pacific. Maybe because of the economic times, or because we walked in and they had space available, we got a decent discount off the advertised rate for the flight.


We took off from the Haines airport in the beautiful red Bush Hawk-XP single engine plane piloted by owner Paul Swanstrom. Only one other passenger joined us for the flight.

After taking off from the Haines airport we rapidly climbed up and into the mountains of Glacier Bay NP. We flew over and even between snow-covered mountain peaks and had a totally unique perspective on the waterways of Glacier Bay and the glaciers that emptied into it. 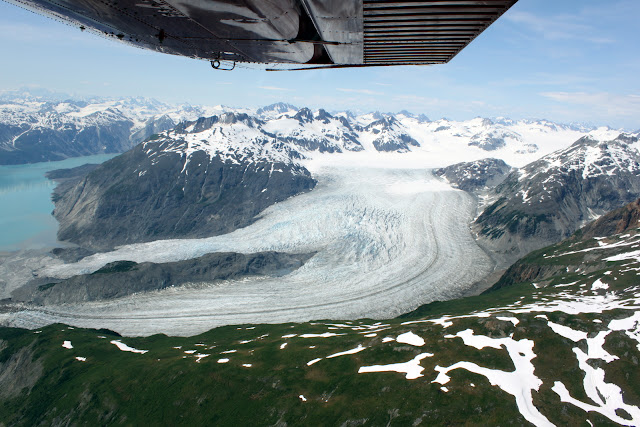 It is difficult to find the words to describe the vastness and splendor of this place, and the photographs we took don't even begin to do it justice. Practically every minute of the flight was jaw-dropping and wow-inducing, but there were several highlights. 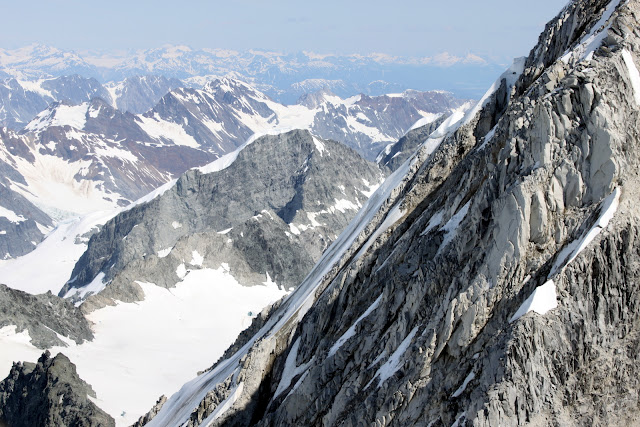 Our flight took us west to the Gulf of Alaska on the Pacific Ocean and we flew over and around the west side of Lituya Bay.

I was aware of Lituya because of a 2005 PBS NOVA episode about tsunamis. Here's the gist of the Lituya mega-tsunami event from the NOVA website:

Lituya Bay, Alaska, July 9, 1958
Tsunamis generally reach a maximum vertical height onshore, called a run-up height, of no more than 100 feet above sea level. A notable exception was the 1958 tsunami triggered by a landslide in a narrow bay on Alaska's coast. Its over 1,700-foot wave was the largest ever recorded for a tsunami. It inundated five square miles of land and cleared hundreds of thousands of trees. Remarkably, only two fatalities occurred. In the wake of the Lituya tsunami, scientists realized for the first time that a landslide—90 million tons of rock in the case of Lituya—could produce a giant wave.

Another highlight was flying over the outlet of the Margerie Glacier at the same time a cruise ship was departing. This was one of the few times there was anything man-made to give a perspective on just how enormous the glaciers were. The cruise ship looked like a toy. 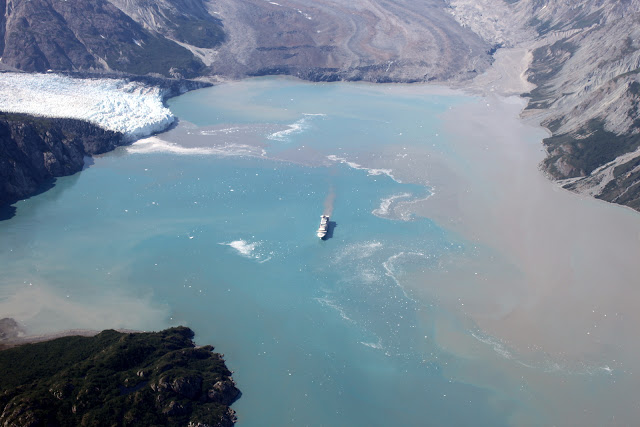 Probably my favorite part of the flight was the landing on the beach on the Gulf of Alaska. Paul explained that we could probably land, as he had recently done so, but we would need to fly over the spot first to make sure there was no driftwood or debris there that would preclude a safe landing. After a quick flyby he determined it was safe, we came in from the south, flying over the La Perouse Glacier, and landed gently on the beach. Here's a video of the landing.


Almost as soon as we touched down, Paul began to turn the plane around to position us for take-off after our 30 minute or so stop. But the plane bogged down in the sand and wouldn't move. That was a surprise! Paul shut the engine down and calmly explained that the three of us would need to get out to reduce weight, so we did. After we got out and stepped back from the plane, he finished turning it around and taxied it a little south toward the glacier. 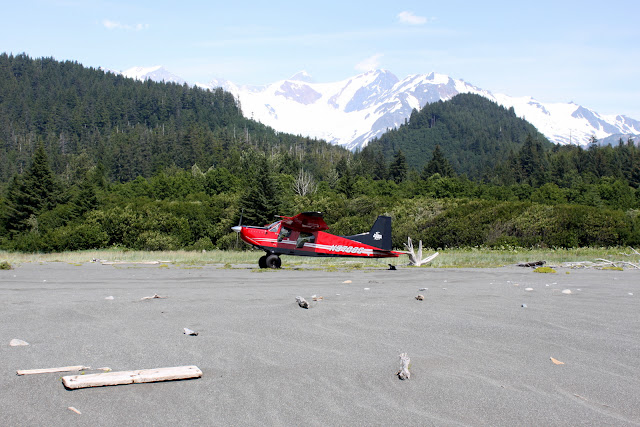 As we watched the plane move just a short distance away from us, it occurred to me how very far away from civilization we really were. Then in a fleeting moment of paranoia I thought to myself, "we'd be totally screwed if he just took off" and "what if the engine doesn't restart?" When we met Paul on the beach, I asked him about using a radio here and he explained that there was no coverage for radio (much less cell phones) unless another plane was nearby. He explained that he had a satellite phone with him if we needed it (and a handgun). Interestingly, while we were on the beach, another plane did fly by, just off the coast. 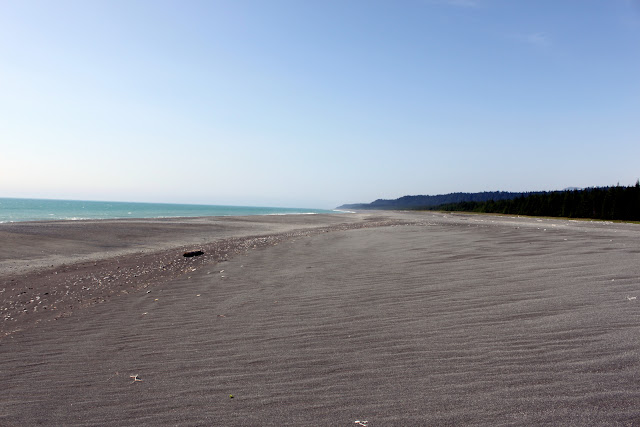 Here's a Google Maps satellite view of our landing spot:

Paul pointed to some tracks on the beach and pointed out that we were seeing three different sets of tracks: grizzly bear, wolf, and moose. After walking up and down the beach and taking photos a little longer, it was time to reboard and we took off in just a few hundred feet and flew on up the coast. Shortly we saw sea lions and grizzly bears at various spots on the beach. Soon we turned back east and entered the mountains again. 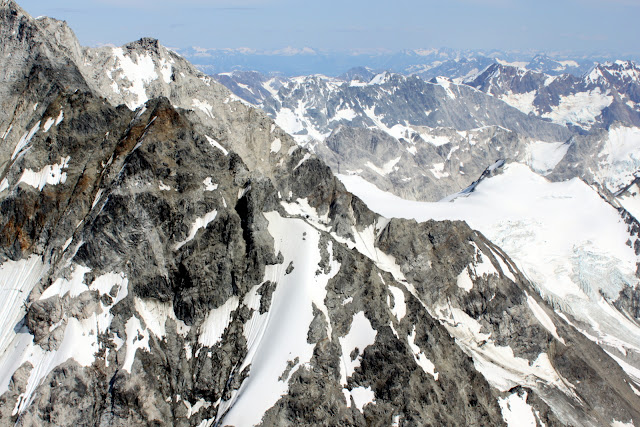 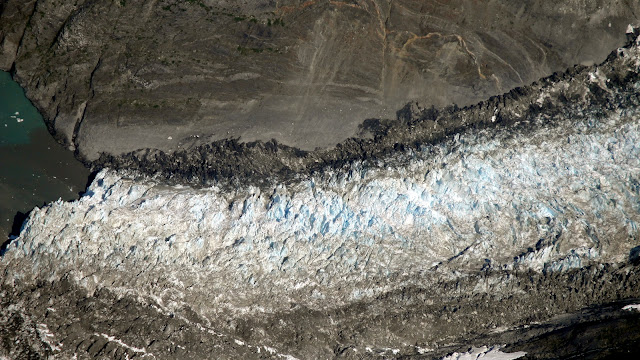 As we flew back, Susan asked about our route and when Paul answered, she asked if we could go back a different way than the way we came to try to get a better view of Mt Fairweather. Paul looked at his watch and instruments, and to my surprise, said, "OK, I guess we can do that; that way may not be quite as scenic and it might take us a little longer to get back." Talk about accommodating! 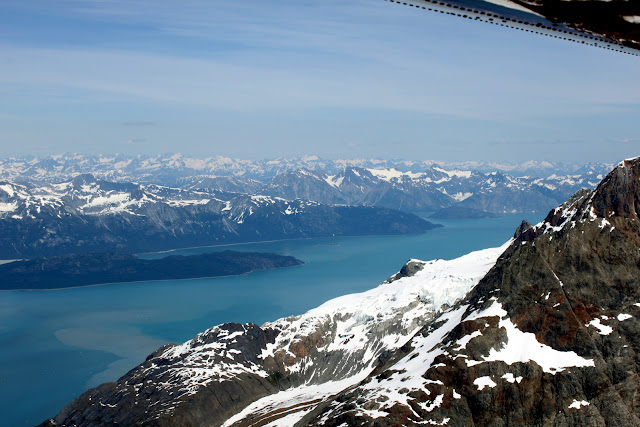 It would be hard to imagine a more spectacular scenic flight than this. It was expensive, but it was totally worth every penny. After we landed, I remarked to Paul that I could see how his biggest marketing challenge would be persuading someone to spend a lot of money on something they can't appreciate that they would want to see and experience -- until they've actually experienced it.

We would highly recommend this way of seeing Glacier Bay. When we return to Alaska I'm sure we won't hesitate to take another flight-seeing adventure!